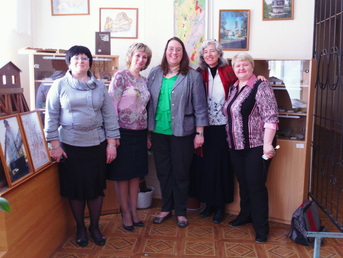 Some teachers and administrators we met while in Russia.
Traveling for education is different from traveling for pleasure. When you travel for pleasure, you can bounce about wherever you decide. Traveling for education means traveling with a purpose.  That's where the idea of an "Essential Question" comes in. This essential question is a question that guides your inquiries while traveling. The key though, is that this question could apply to ANY country you visit.  I detailed how I came up with my own essential question on my blog post Essential Questions for Russia.

My own question was difficult to nail down. I really wanted my question to be one that resonated with me. I tried several "themes" on for size before settling on "Is language diversity considered to be valuable with regards to immigrants or with bilingualism?" Coming from an American perspective of English as a Second Language instruction, I had assumed that Russia would have a similar program for teaching their immigrants Russian. I had heard that Russia was struggling with their own immigration issues and thought there would be an easy parallel to be found between our two countries.
Here in the United States, we value bilingualism to a point. We admire those people who can speak more than one language, but we don't want second languages taught in our school except as an elective in high school. Access to English as a Second Language programs are a protected Civil Right (Lau v. Nichols), and the number of English Language Learners in our school systems are growing (Strauss).

Imagine my surprise when almost every teacher or administrator I spoke with in Russia said almost the same thing. "We don't have that problem here." According to them, students don't enter school without already knowing Russian.  In fact, according to those I spoke with, if students don't know Russian, they often take private lessons and then enroll in school. Several administrators flat out said that students entering school without knowing Russia would not ever happen. There was one principal, however, who was much more honest with us. Though they did not have any students who fit the profile of being a "Russian Language Learner," they were aware that they (meaning Russia) had a growing immigrant population and that students such as this would most likely be appearing in their school system soon. "I don't know what we'll do to teach these students when they come," was her final comment on the question. 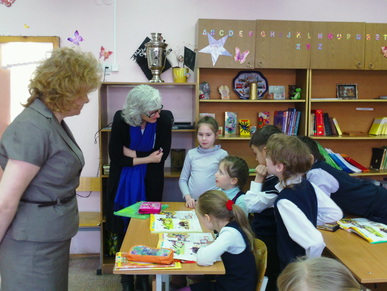 A 2nd grade English class.
So while a parallel between our "ESL" programs doesn't exist in Russia, there was an interesting dichotomy that I observed. Every school we went to offered a foreign language. Typically the choice (if there was one) was either English or German, most likely though were English classes.  Learning English, it was said, was looked upon as an "opportunity" not a class.  English is a language of power. If you speak English, you can do business just about anywhere in the world. There are more opportunities for youth who can speak English, both for travel, for work and for school. Parents, teachers, students and school systems valued students learning English or other "power languages."

If the language wasn't a "power language," such as the Tajikistan languages, Albanian, or other languages of immigrants into Russia, then the prevailing attitude was that those languages were a "detriment" and students needed to forget those languages and learn Russian as soon as possible.  One person who spoke with our group even commented about how speaking a native language at home can "retard" or prevent the student from gaining full Russian proficiency.

Returning to my Essential Question, "Is language diversity considered to be valuable with regards to immigrants or with bilingualism?" the answer is both yes and no.  Yes, if the language is a "power language" and "no" if the language is a minority language.  I found that having this essential question meant that I was never at a loss for what to ask the teachers or administrators that I met. I always had a focus that I could fall back on when the conversation naturally lulled.
In reflection, though coming up with an essential question was difficult, it was incredibly helpful and really guided my interactions with the professionals that I met.  Though I feel that I have an answer to my question regarding Russia, there are some lingering questions that I have.  For example, did the administrators and teachers I spoke to really believe that students like this didn't exist, or was it a verbal "sweeping the issue under the rug?"  I also wonder what the future holds for the Russian educational system as their immigrant population grows. Will the struggles of the students affect the legal system in Russia much as the struggle for civil rights did here in the States?

Regardless of how the Russian system turns out, I feel vested enough in this essential question that I may dust it off and bring it out the next time I travel to another country. It will be interesting to see how that country (whatever it is) compares both to the United States and to Russia.